Working in InDesign can become almost second nature to you after a long time of doing it. After a steady period of following InDesign tutorials and using it for all appropriate jobs, it becomes extremely easy, and you almost instinctively know what to do. Scripts are a useful part of InDesign which can be a great thing to learn about when you’ve reached that level, or even earlier if you want.

Scripting is useful because it allows you to automate certain tasks that it would have taken you longer to do otherwise. Scripts also let you figure out ways around things that seem impossible or hard to do in InDesign. You can find scripts to do almost anything in the program if you know where to look.

If you know Javascript, Applescript, or Visual Basic, then you can create your own script files. However a much easier alternative to that which anyone can do is simply to download the appropriate script. You can’t do this in some special cases where the scripts aren’t written yet, but for almost every need, task, or problem someone has written a script. 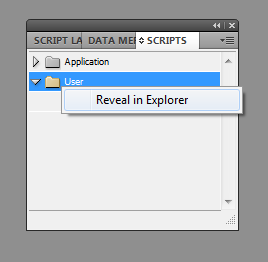 To download scripts from online, just go to a site that carries them. Finding a site like this is as simple as a Google search, and the more specific you are the easier it will be to locate the exact thing you want. Then, once you’ve downloaded the script, installing it is simple.

In the folder you open when you click Reveal in Windows Explorer, you’ll find all the previously installed scripts. It is here that you can install the new ones as well. Simply drag and drop the new scripts into a folder called Scripts Panel, and they will automatically load into the program. It’s so easy that you don’t even have to restart the program.

Your newly installed scripts will show up under the category of User in the Scripts panel. The Application category contains scripts that are pre-installed as a default by the program.

Once you’ve loaded the scripts into the correct folder, you can go on to use them very easily from the scripts panel. If you want to apply a script to an object, then select the object then double click it. I hope that what you’ve learned from this InDesign tutorial will be practical and save you a great deal of time in the future.